Version v0.7 of the documentation is no longer actively maintained. The site that you are currently viewing is an archived snapshot. For up-to-date documentation, see the latest version.

An end-to-end tutorial for Kubeflow Pipelines on GCP

This guide walks you through a Kubeflow Pipelines sample that runs an MNIST machine learning (ML) model on Google Cloud Platform (GCP).

By working through this tutorial, you learn how to deploy Kubeflow on Kubernetes Engine (GKE) and run a pipeline supplied as a Python script. The pipeline trains an MNIST model for image classification and serves the model for online inference (also known as online prediction).

Overview of GCP and GKE

The Cloud Shell is a browser interface that provides command-line access to cloud resources that you can use to interact with GCP, including the gcloud command and others.

Kubernetes Engine (GKE) is a managed service on GCP where you can deploy containerized applications. You describe the resources that your application needs, and GKE provisions and manages the underlying cloud resources automatically.

Here’s a list of the primary GCP services that you use when following this guide:

The model and the data

This tutorial trains a TensorFlow model on the MNIST dataset, which is a hello world scenario for machine learning.

The MNIST dataset contains a large number of images of hand-written digits in the range 0 to 9, as well as the labels identifying the digit in each image.

After training, the model can classify incoming images into 10 categories (0 to 9) based on what it’s learned about handwritten images. In other words, you send an image to the model, and the model does its best to identify the digit shown in the image. 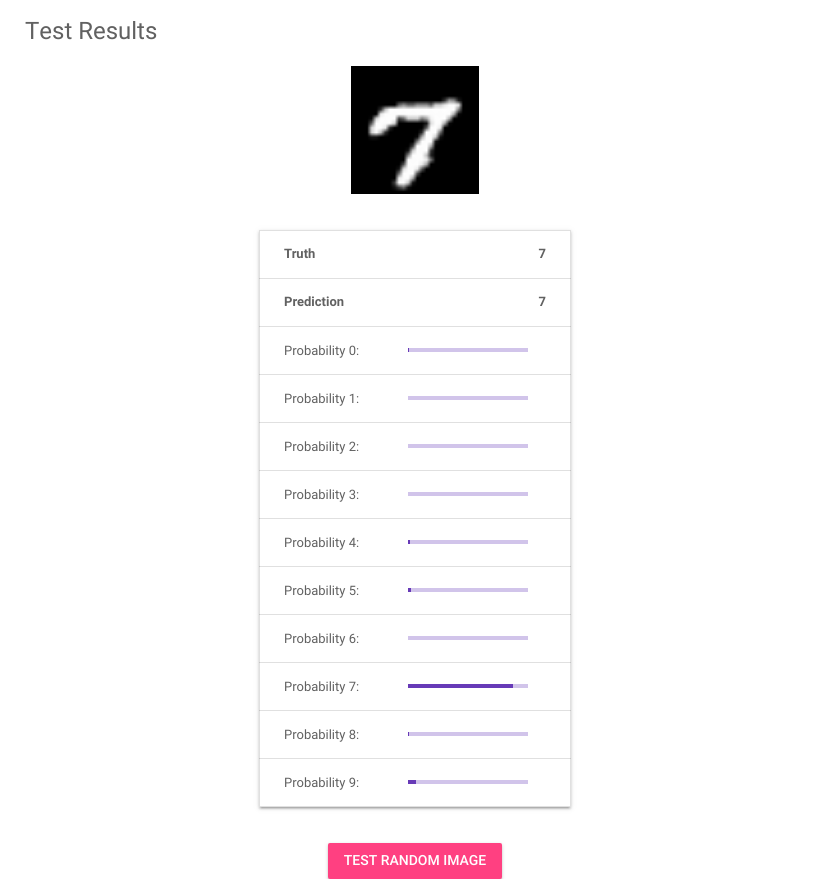 Set up your environment

Follow these steps to set up your GCP environment:

Follow the link to activate a Cloud Shell environment in your browser.

Set up some handy environment variables

Set up the following environment variables for use throughout the tutorial:

The next step is to create a Cloud Storage bucket to hold your trained model.

Cloud Storage is a scalable, fully-managed object/blob store. You can use it for a range of scenarios including serving website content, storing data for archival and disaster recovery, or distributing large data objects to users via direct download. This tutorial uses Cloud Storage to hold the trained machine learning model and associated data.

Use the gsutil mb command to create a storage bucket. Your bucket name must be unique across all of Cloud Storage. The following commands create a bucket in the region that corresponds to the zone which you specified earlier in the tutorial:

To simplify this tutorial, you can use a set of prepared files that include the pipeline definition and supporting files. The project files are in the Kubeflow examples repository on GitHub.

Clone the project files and go to the directory containing the MNIST pipeline example:

As an alternative to cloning, you can download the Kubeflow examples repository zip file.

You need Python 3.5 or above. This tutorial uses Python 3.7. If you don’t have a Python 3 environment set up, install Miniconda as described below:

If the conda command is not found, be sure to add Miniconda to your path:

Install the Kubeflow Pipelines SDK, along with other Python dependencies defined in the requirements.txt file:

The pipeline is defined in the Python file mnist_pipeline.py which you downloaded from GitHub. When you execute that Python file, it compiles the pipeline to an intermediate representation which you can then upload to the Kubeflow Pipelines service.

Run the following command to compile the pipeline:

Go back to the the Kubeflow Pipelines UI, which you accessed in an earlier step of this tutorial. Now you’re ready to upload and run your pipeline using that UI.

The pipeline is defined in the Python file mnist_pipeline.py which you downloaded from GitHub. The following sections give an overview of the content of that file.

The @dsl.pipeline decorator provides metadata about the pipeline:

The mnist_pipeline function defines the pipeline. The function includes a number of arguments which are exposed in the Kubeflow Pipelines UI when you create a new run of the pipeline. Although you pass these arguments as strings, the arguments are of type kfp.dsl.PipelineParam.

The following block defines the train component, which handles the training of the ML model:

A component consists of a kfp.dsl.ContainerOp object with a name and a container path. The container image for the MNIST training component is defined in the MNIST example’s Dockerfile.model.

The training component runs with access to your user-gcp-sa secret, which ensures the component has read/write access to your Cloud Storage bucket for storing the output from the model training.

The following block defines the serve component, which serves the trained model for prediction:

The serve component differs from the train component with respect to how long the service lasts. While train runs a single container and then exits, serve runs a container that launches long-lived resources in the cluster.

The component creates a Kubeflow tf-serving service within the cluster. This service lives on after the pipeline has finished running.

You can see the Dockerfile used to build this container in the Kubeflow Pipelines repository. Like the train component, serve requires access to the user-gcp-sa secret for access to the kubectl command within the container.

The serve.after(train) line specifies that this component must run sequentially after the train component is complete.

The following block defines the web-ui component, which displays a simple web page. The web application sends an image (picture) to the trained model and displays the prediction results:

Like serve, the web-ui component launches a service that continues to exist after the pipeline is complete. Instead of launching a Kubeflow resource, the web-ui component launches a standard Kubernetes deployment/service pair. You can see the Dockerfile that builds the deployment image in the ./deploy-service/Dockerfile that you downloaded with the sample files. This image runs the gcr.io/kubeflow-examples/mnist/web-ui:v20190304-v0.2-176-g15d997b-pipelines container, which was built from the MNIST example’s web-ui Dockerfile.

This component provisions a LoadBalancer service that gives external access to a web-ui deployment launched in the cluster.

The main function compiles the pipeline, converting the Python program to the intermediate YAML representation required by the Kubeflow Pipelines service and zipping the result into a tar.gz file:

Clean up your GCP environment

Run the following command to delete your deployment and related resources:

Delete your Cloud Storage bucket when you’ve finished with it:

As an alternative to the command line, you can delete the various resources using the GCP Console.

Build your own machine-learning pipelines with the Kubeflow Pipelines SDK.

Was this page helpful?

Glad to hear it! Please tell us how we can improve.

Sorry to hear that. Please tell us how we can improve.